The Nordic Research Prize for Alternatives to Animal Experiments 2019

Professor Erik Walum gave the address to the prizewinner, who was presented with both a diploma and the prize of 50,000 Danish kroner. In the prize-giving address the reasons for choosing Alison Gray were described in the following words:

“You have through the founding of your organisation, Afability, shown initiative and tireless efforts to communicate to lawmakers, researchers and the public – in terms of both the purely scientific and of animal welfare – the importance of replacing antibodies generated in laboratory animals with animal-free antibodies. With the purpose of promoting this change in practice, your organisation will offer technical resources and training in generating non-animal, synthetically generated recombinant antibodies.

In December 2018, ESAC (ECVAM Scientific Advisory Committee)* was mandated to look into the subject of affinity reagents and you, Dr. Gray, were appointed as a member of the working group which ESAC set up. With a master’s degree in toxicology from the University of Birmingham, a Ph.D. in biomedical sciences from the University of Nottingham, and experience both as a researcher and as head of in vitro toxicology departments in French companies, you had an ideal background for participating in the working group on antibody production together with other experts. ESAC’s report is expected in the New Year and there is no doubt that the result of the work is pointing to the beginning of the end for antibodies generated in animals. 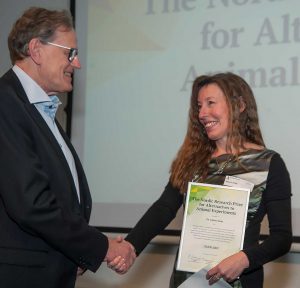 The Prize is intended as a personal acknowledgement and an encouragement.

We believe that you, Dr. Gray, with your initiative, will succeed in increasing understanding in research circles, that the shift from making antibodies in animals to making them with non-animal methods is the only way to go for a society which wants to be known for both reliable, reproducible research and compassion for animals.

It is the hope of the three funds that the Prize will stimulate continued and indeed increased efforts in the field.

Warmest congratulations and a fair wind in the future for your project which, we are convinced, will be of benefit to animals.”

*ECVAM is the European Centre for the Validation of Alternative Methods

In the case of antibody production in animals, it is a fact that millions of animals worldwide experience often considerable suffering – among other things, because of the conditions in which they are kept and the repeated immunisations and blood-tapping.  Checks on businesses with that production often reveal highly criticisable conditions. There are therefore strong animal welfare grounds for moving away from producing antibodies in animals.

The EU directive requires use of non-animal methods where these are available and can give scientifically satisfactory results. Unfortunately some researchers seen to take that requirement rather lightly – either due to lack of commitment or to ignorance of the requirements of the law.